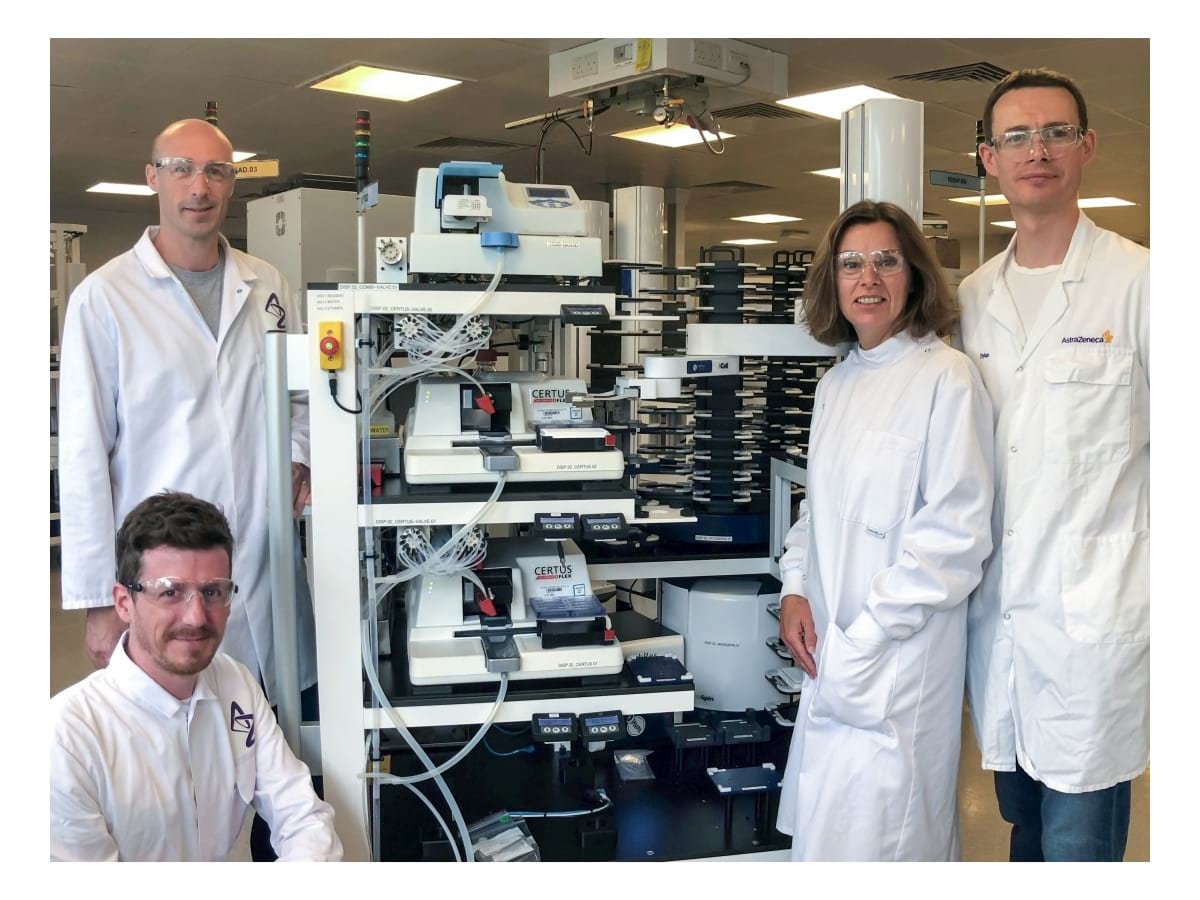 As part of AstraZeneca’s new global HQ and R&D centre at the Cambridge Biomedical Campus, AstraZeneca’s Centre for Lead Discovery (UKCLD) contains world leading infrastructure for the storage and testing of the our collection of over 2 million compounds. This is the only centre of its type in the UK. Scientists within it perform High Throughput Screens (HTS) to identify candidate drug molecules. As part of this collaboration, AstraZeneca is working alongside the Medical Research Council, Cancer Research UK, Charles River Labs and other Open Innovation partners to advance academic drug discovery.

The UKCLD employs a range of screening technologies and capabilities to deliver high quality hit identification at scale. We have aligned our liquid handling dispensers from assay development through to HTS and secondary screening, and moved towards smaller (sub μL) volumes to facilitate 1536 well plate screening and reduce reagent costs though lower dead volume waste.

We invested in HighRes Biosolutions CoLAB automation systems, comprising modular CoLAB Flex carts that are docked onto larger Microstar platforms. Currently we have twelve automated Certus Flex Liquid Dispensers on CoLAB Flex carts, and four dispensers for use offline. We chose the Certus Flex for dispense speed, accuracy and lower dead volumes (the use of syringe based dispensing reduces dead volumes to <1 mL), although our initial evaluation also highlighted enhancements to make it suitable for uHTS screening.

To reduce dispense time/plate we typically use four valves per reagent, the software allows calibration of individual valves for specific assay volumes (this is critical for sub μL dispensing) and out-of-the box precision for larger volumes, improving assay statistics. We routinely filter our reagents to avoid blockages and maintain reliability and have found that good cleaning procedures and housekeeping are also key to reliable dispensing.

We have found Fritz Gyger AG to be open to further development of the Certus Flex and have worked collaboratively with us to develop a more flexible dispenser to meet our uHTS needs, for example, developing software to allow simultaneous dual addition of reagents, using up to eight valves in parallel per reagent. We also developed an angled dispense head, of benefit for both cell-based assays (reducing the risk of disrupting cell monolayers after washing steps) and biochemical assays (reducing bubbles/frothing and eliminating the need for centrifugation post-addition). Together we have also developed peripherals for the Certus Flex, such as a universal bottle holder and increased volume reagent bottles for HTS volumes. We continue to work with Fritz Gyger AG on Certus Flex product developments, including an offline valve cleaning station, and an automated valve auto calibration/verification procedure utilising HighRes Cellario software.